The cover of this Sunday’s Parade magazine asks, “Could you ace America 101?” and inside you can complete their 4th of July quiz. I took a quick glance through and was able to answer a handful of questions, not great, but still way better than I could have done 17 years ago when we moved here.


On top of the magnitude of new things you have to learn and absorb as a new expat anywhere, I realized I had no idea about American history as we adjusted to life in the US! And here we had moved to one of the major US historical destinations. People come to Massachusetts to see the Mayflower and Plymouth Rock to see how the first Pilgrims crossed the pond and where they landed. They visit the Old North Bridge in Concord, very near where I live now, which was the site of the first day of battle in the American War of Independence. This is where the battle that Britain would ultimately lose began! And I knew nothing about it! Who knew that The Boston Tea Party had nothing to do with afternoon tea? So we trekked Boston’s famous Freedom Trail and visited all the historic sites along the way to familiarize ourselves with our new home and try to learn about some of these major events in American history.

I had dropped history in school before O’Levels, so perhaps this is why I was so clueless. My nephew tells me that a third of his history GCSE (the new O'Level) was made up of American history! He even came to Washington D.C. and Philadelphia on a school trip. There was none of that back in my day.


As an expat anywhere, especially a new expat, you hear quotes and references and about traditions in sports, in the media and at social gatherings that can leave you with a blank expression. The first summer we were here we went to a Boston Red Sox game, coincidentally against the Yankees. We had no idea of the significance of this! And when everyone stood up in the 7th inning, we thought the game was over. Who has ever heard of a 7th inning stretch? With cricket everyone goes in for tea. Boy, were we green! When asked in a restaurant if we were “all set” as they cleared our “entrée” plates (that would be main course) we thought they meant are we finished with that course. Next thing the bill appears and my husband and I are both wondering who asked for it! We now know to say, “We may have coffee or dessert”.  And back to the history, I certainly did not know what “the shot heard ‘round the world” was or who Paul Revere was for that matter. I like to know the details so I started reading guidebooks and the newspaper and paying attention to what people were saying and asking if I didn’t know what someone meant. We have even been to the reenactment of that famous battle at the North Bridge on Patriot’s Day – a special public holiday just in Massachusetts.

I had to learn even more details in 2006 when we took the test to become citizens. There was lots of new information there! So, nowadays, I think I can keep up with most things that people are talking about without being thrown a curve ball too often (see, I know what that means now!)

Have a great 4th of July! 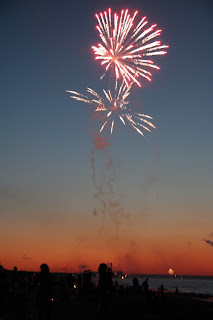