Verdict on the Christmas Pudding 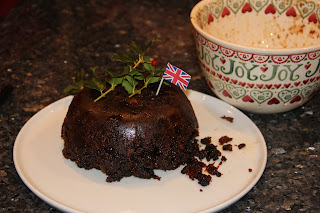 As promised in my Christmas Pudding blog post from earlier this month (you can read it here), I can now give you the verdict on my homemade Christmas pud! On Christmas Day, with much anticipation, we removed the foil and greaseproof paper from the pudding bowl. The pudding looked and smelled delicious. We warmed it up again and without further ado turned it out onto a plate! As everyone gathered round, we artfully arranged a sprig of holly from the garden on top and pulled out the bottle of brandy! We poured a large sploosh of brandy over the pudding and set fire to it. What a spectacle! There were lots of oohs and ahhs from the guests! Unfortunately the photographer – me – was a little slow. I had just eaten a huge Christmas dinner after all. So we had to do a take two and pour more brandy and create more flames. A little more brandy won’t hurt we thought. And it didn’t! I got the photo and we were ready to eat.

The thick, creamy brandy sauce was piping hot. We poured a generous helping over our slices of pudding and dug in. My concern over using butter instead of suet was unfounded. Everyone agreed the pudding was so light and delicious -much lighter than the store-bought version. I will definitely be making my own pudding again next year and using butter too! Hope you also enjoyed yours or will try making your own next year!